The phase of the reflective wave is depending on the sign (plus or minus) of reflectivity obtained by the acoustic impedance of ultrasonic propagating medium and reflector.

●The setting of color display by the phase of echo

This is the setting that display the ratio of waveform in a θ coordinate (polar coordinate) using color charts, which based on a forward waveform of a probe used in the test.
It can be discriminated what kind of reflector with accuracy by the color of the phase of reflected wave. 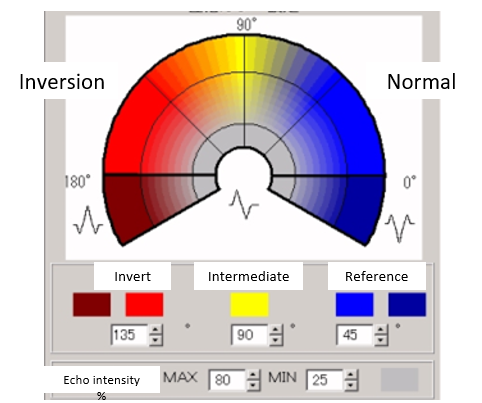 The setting of color display by the phase of echo

We scanned an epoxy resin test piece containing a piece of metal and paper by X-Y scanning. 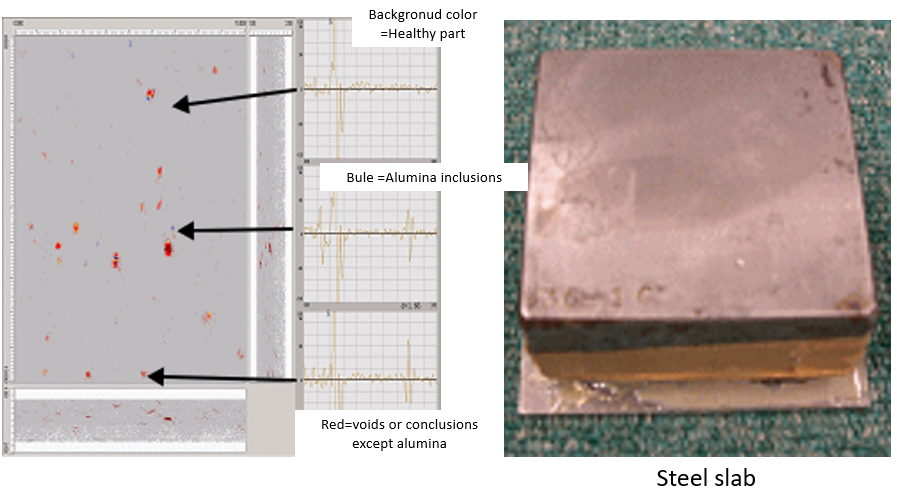 The phase of the reflected wave from Alumina containing steel is generally inversion, but it changes to normal inversion at the test using a spherical probe which has an adequate angle of incidence, and it can be discriminated between Alumina and void. 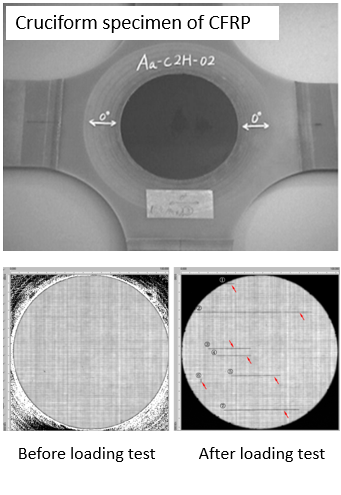 The testing of cruciform specimen 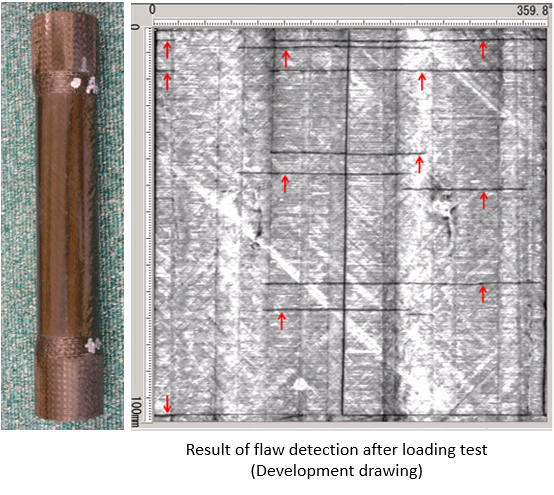 The testing of cylindrical specimen

・What is Matrix crack?

Ultrasonic testing required couplant (water, oil, glycerin, etc.) to propagate ultrasonic waves to the test piece. However, this flaw detection method propagates ultrasonic waves in the air without requiring a couplant. Therefore, it is possible to use test specimens that cannot be applied to water, oil, etc.

Compared with the water immersion technique, the Air-coupled ultrasonic technique is advantageous in that a couplant unnecessary. In this report, we checked the size of defects that can be detected by Air-coupled(Non-contact) ultrasonic Testing.

A test piece of a resin plate pasting paper artificial defects of 9mm, 7mm, 5mm, 3mm in diameter was prepared. Then, the transmitter / receiver probes were placed opposite to each other, flaw detection was performed, and checked the detection situation.

For artificial defects up to φ3mm, since the height of the transmitted pulse was decreases, it was possible to distinguish it from the healthy parts.

Bonding failure (peeling between laminations) that occurs in the bonding process of the plywood is a problem. The experiment was made to detect it by confirming state of the adhesive bonding part by Air-coupled ultrasonic flaw detection.

●In case of flaw detection of materials which is low density and has rough surface like the wood・Since wood is not suitable for water, oil, etc. as a couplant, it is necessary to conduct the test by non-couplant.
・The transmission technique is suited for the materials that ultrasonic waves are attenuated by material structures,or the direction of flaw is uneven.

Because transmission pulse height decreased in the part having poor joining (detachment between the laminates), in the flaw detection result of the photograph (lower), it was possible to distinguish the joint part (blue) from the poor joint part (yellow / red).

In addition, since the bonding part of the plywood has little influence of material noise, and the transmittance is good, a reduction of the transmission pulse height of the defective bonding portion was particularly notable. 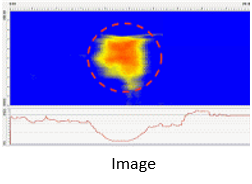 In the experiment, prepare plywood (length 450mm × width 150mm ×thickness 18mm), arrange the transmitting probe and the receiving probe in opposition, insert a plywood between them.
The transmitted ultrasonic wave passes through the plywood and receives by the receiving probe. Part or all of the ultrasonic waves are intercepted in the defective bonding portion. Therefore, received pulse heights are lower than in the healthy part.

Until now, because the transfer loss to the specimen is large, thick objects with high attenuation could not be detect flaws, but highly sensitive flaw detection became possible.

In the artificial defects with φ18mm and φ15mm, the transmitted pulse height decreased, and hence it was possible to discriminate from the healthy part.